We’ve been steadily purchasing knick-knacks and pictures for The Prairie to make it more homely. One of the ideas we had was to purchase old postcards of Sheringham and Norfolk and frame them together in groups of four for wall mounting. We started our collection with the purchased of a handful of black and white photographs from a craft and antiques fair in Blakeney.

Our father-in-law mentioned that he may have a handful of old Norfolk postcards and last weekend brought them round. Much to our amazement some of them included postcards that my wife had written back to her parents of our many holidays in the area.

Wish You Were Here

My wife is still quite old school when it comes to holiday communications. She does text people but will insist on finding an interesting postcard to post back to relatives.

I find postcards fascinating. They are a collective photo album of holiday hot-spots and provide timeless insights into how tourist areas present themselves to visitors. 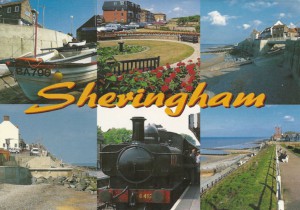 This postcard is a traditional montage of Sheringham. It has several pictures of the beach plus one of the gardens on the Esplanade and of the North Norfolk Railway.

My wife wrote that we’d just purchased our first toy sailing boat and enjoyed playing with it on the boating lake in Sheringham. We watched a Punch & Judy show with the children, visited Banham Zoo, the Dinosaur Adventure Park and spent a lazy, hot summers day on Holkham Beach followed by a picnic in the woods and ice-cream. 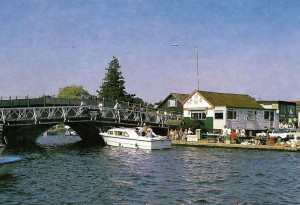 We purchased this postcard in Wroxham and it depicts  a fairly standard sight on the Broads; a family enjoying a cruise in a rental boat.

The choice of card was probably influenced by what happened that day. We’d popped into Wroxham to try and rent a boat on impulse but they were all booked out.

We ended up finding a nice pub overlooking the Broads. During that holiday we also enjoyed a steam train ride on the North Norfolk Railway to Holt and met my sisters new boyfriend, David, who is now very much part of the family.

Iconic Images from the Past 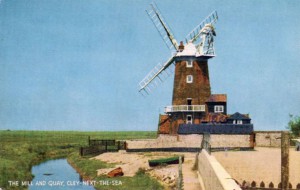 One of the attractions Norfolk holds for us is the fact that it has a timeless charm. Some of the postcards (like the Wroxham Bridge one above) could have been taken yesterday.

It’s only when you examine them closely that you can date them, usually by the fashions or the cars.

I never tire of the view depicted in this postcard of Cley Windmill. With no visible clues to date it, the picture could have been taken at any point in the last 200 years. 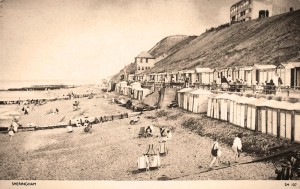 My last offering is one that is dated by the fashions. Norfolk has been a popular holiday destination since the Victorian age of the railways, which brought tourists from the four corners of England to the picture perfect villages in the area.

There must have been significant changes everywhere, with railway stations, promenades and hotels popping up to service this fledgling tourist industry all over the county.

Thankfully Norfolk still benefits from tourism whilst still retaining its unique charm that spans the centuries.