The winter months will soon be behind us and Norfolk is preparing a veritable cornucopia of events to entertain visitors to the county from Spring 2015 onwards. 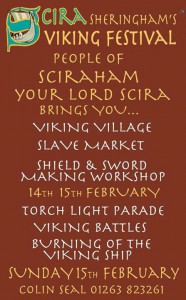 Did you know that the name Sheringham is of Scandinavian origin? It translates to “The Ham of Scira’s People”. Lord Scira is believed to have been a Viking warlord who was given the land as a reward for his performance in battle.

Following on from the success of last year’s inaugural event to celebrate Sheringham’s Viking heritage the organisers have expanded it this year to include new items including a Viking Village and a Slave Market (auction).

The event runs for two days and packs in children’s workshops in shield and sword making, story telling and battle re-enactments on the high street.

This all neatly cumulates on Sunday with a torch-lit parade followed by the burning of a 24ft Viking Boat on the beach.

You may recognise Pensthorpe from the popular BBC TV programme “Springwatch”. The programme was broadcast from the park from 2007 for three years.

If your family are nature lovers, why not pop over to Pensthorpe Park near Fakenham and “Bee a Nature Explorer”. Your kids will find out more about some of the fascinating species we share our natural world with.

Pensthorpe offers a play area for kids to let off steam with over 30 items of play equipment including a slide tower and a zip-wire. And it’s good news for mum and dad; the play area is included in the normal admission price.

The Boggles are sprinkling a little magic on BeWILDerwood for half-term. After you’ve clambered, climbed, slithered and zipped around this adventure park head towards the big-hat, where there are craft activities with a bonfire around the fire pit at the end of the days activities.

Activities to do all year round

See the seals at Blakeney Point

After the storm surge of winter 2014, where many seal pups were separated from their mothers during the extreme tidal surge, the pups have fared much better this year.

A record number of them have been born in North Norfolk as the breeding season ends. More than 1,500 have been counted in the last few weeks at Blakeney Point, making it England’s largest colony of grey seals. 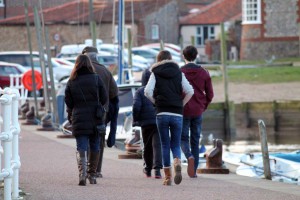 The area is an AONB and parts of the reserve are owned by the National Trust. They recommend that the best way to see the seals is by boat from Blakeney or Morston Quay.

If you want to see seal pups there is another opportunity; the Common Seal pupping season is during the summer. 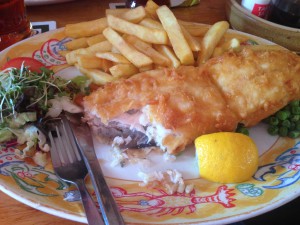 Once you’ve enjoyed seeing the seals in their natural habitat, why not pop over to the King’s Arms for lunch. It’s a traditional Norfolk Inn that can whip up an excellent plate of fish and chips, enough to sate the largest appetite.

We also recommend The White Horse for a slightly more formal meal.

If you want to walk off lunch, why not take in the Norfolk Coastal Path. The walk from Morston Quay is just over a mile and offers an exceptional view over the marshlands. If you wish to make a day of it why not park at Morston, walk to Blakeney, see the seals, eat and then either walk or catch the Coasthopper bus back to Morston.

Ride the Poppy Line and walk back to Sheringham

Why not try catching the Poppy Line to Weybourne from Sheringham and then walking back along the Norfolk Coastal Path.

You will get the opportunity to view some of the most spectacular scenery England has to offer on both journeys; from the comfort of a heritage railway carriage and on the return journey via the beach and cliffs as you walk back into Sheringham.

There are two sea life centres nearby; the closest one to The Prairie is in Hunstanton. The centre has recently undergone a major refurbishment after the tidal surge in December 2013 caused major damage to the building and the exhibits.

If you didn’t get enough of the seals at Blakeney then you will get the opportunity to see them underwater through a glass window. There is also a seal hospital, ray tank, otter display and many more features you’d come to expect from a sea life centre.