The weather in Norfolk during the summer is usually fantastic. Glorious sunshine, blue skies, golden beaches and plenty of ice-cream. We are grateful for the fact that the UK weather generally exceeds our expectations.

We are, however, open all year round and as such cannot guarantee the weather will be fine out of season. Don’t get me wrong; we stayed in The Prairie for a week up to New Year 2014 and had glorious weather. Unpredictable is probably the best word to use.

We cater for family groups, so one of my pet projects after we purchased The Prairie was to make sure that the entertainment was sorted; for rainy days when children are stuck inside or for grown-ups in the evening when the kids are in bed.

I thought it would be a good idea to install Sky TV, as the Freeview signal to The Prairie is not the best (a handful of channels are missing). However, this was a costly option, especially as the property is unoccupied for a few weeks in the year. It would also be a logistical nightmare adding and removing premium channels around bookings to reduce costs. 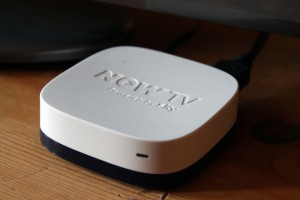 This is when the Now TV box came to my attention. It requires a broadband connection (which we already had installed for our Hive heating controller and guests use) and a TV with a HDMI connector. The box itself costs £9.99 and is available to order from the Now TV website and selected retailers.

Included in the box is a remote control, 2xAA batteries, a setup-up guide, a power adaptor and incredibly for a £9.99 product an HDMI cable.

The unit is a re-branded Roku LT box. It’s rather dinky; roughly the dimensions of a large coaster and a couple of centimetres tall. It’s got a rubber base to prevent it moving around too much but I ended up sticking some Blu-Tack under it to fix it in place.

The rear of the unit has three ports; HDMI, DC IN and A/V Out. Plug the box into your TV with the supplied HDMI cable and plug the power in. You can buy an optional AV cable from the Sky Store (£4.99) that plugs into the A/V out socket to connect the box to older TVs that are not HD ready.

The service is backed by Sky and provides free access to terrestrial catch-up services (BBC iPlayer, 4oD and Demand 5) and pay as you go access to Sky Movies, Sky Sports and a small selection of Sky channels in the Entertainment pack.

You need to create a Now TV account which will involve storing your credit card details on their website. You can either create a new account or use your Sky ID to log in.

The box will guide you through the setup process; connecting first to your Internet connection over WiFi and then to your Now TV account. It will then download any firmware updates before launching the Now TV dashboard.

There are three channel packs you can add. The Entertainment Month Pass and Movies Pass are rolling monthly pay as you go passes that can be cancelled and resumed at any point online from your Now TV account

The Sports Pass is slightly different; you pay £9.99 for a day sports pass. It’s quite expensive. I suppose the rational is that if you have a few friends over to watch the match and split the cost it’s cost effective. This isn’t really an issue for me as I’m not a sports fan and won’t be offering this service to guests.

For £8.99 a month you get live access to 11 Sky Movies channels and access to Sky Movies On Demand. The movie list seems to be updated every couple of weeks.

For £4.99 a month you get live and on demand access to the following channels: 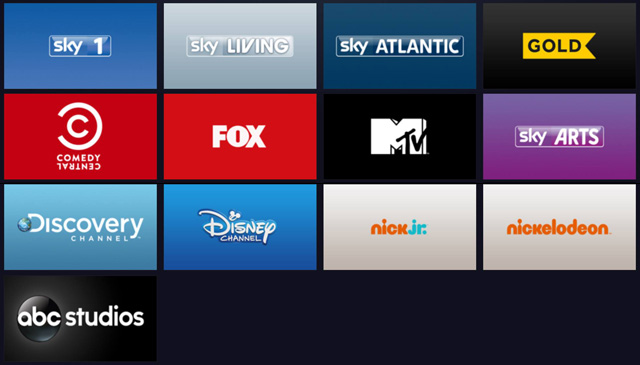 ABC Studios Channel is on-demand only and the Nickelodeon channels were added to the line-up on the 24th July 2014, just in time for the school holidays.

It is worth noting at this point that not all programmes are available on Now TV. For example, up until recently you could not watch The Simpsons on Sky 1. This is down to the broadcast rights on individual programmes. The Now TV website has a list of programmes that are not available and, thankfully, this list is shrinking as Sky renegotiate the rights. 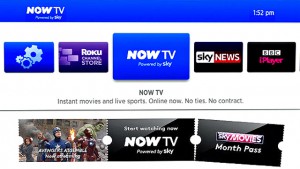 The Now TV dashboard is fairly straightforward and, to date, have had no queries from guests on how to use it.

The box streams at 720p, which is the lowest HD quality, and live channels are in SD. The picture quality is however very good, with smooth video playback on live and on-demand channels. It requires a reasonably fast Internet connection; anything above 8Mbps will probably suffice. I would suggest only using it on an unlimited connection as using the box will count as part of your download usage. 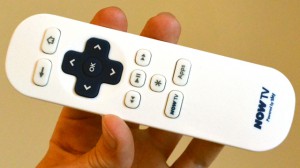 The remote control is straightforward and responsive. It is not possible to switch the box off; it switches itself into standby mode when not in use.

The remote has a handy “Now TV” shortcut button to take users straight into the Now TV app.

Your Now TV account allows you to register up to four devices which includes Now TV boxes, tablets, smartphones and LG  smart TVs. You can watch TV on up to two devices simultaneously. Handy if you also want to benefit from the packages at home.

Settings & purchases can be pin protected (essential to prevent guests from running up a bill on your credit card) and you can set a separate pin to protect movies by age-rating.

There have been a couple of notable outages on Now TV during a couple of recent high profile football matches but on the whole I’ve not had many problems watching movies.

The terrestrial catch up services are excellent and should be familiar to those who use them on other devices. You can add additional channels from the Roku Channel Store though the selection has been restricted to avoid services in direct competition with Sky, such as Netflix or YouTube.

Now TV is in competition with other online streaming services including Netflix, Amazon and BlinkBox. Whilst these all offer a broadly similar service, Now TV is the only one to offer a cheap, dedicated set top box.

Google Chromecast supports Netflix and BBC iPlayer but requires a smartphone, tablet or laptop PC to control it, so not really fit for purpose.

It’s a neat and cost effective way to add Sky Movies and extra entertainment channels to a Freeview TV.