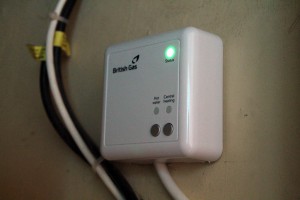 We started our search for a holiday cottage in Sheringham a couple of years ago. As we don’t live particularly local I was concerned about how we’d economically manage the practical aspects of running a cottage from afar, especially the heating.

I work in IT and specialise in controlling remote assets over the Internet (the “Internet of Things”), so started looking for a technical solution to the problem.

When we finally completed the purchase of The Prairie in the summer of 2013 there were a handful of Internet heating control products available. British Gas’s first generation controller, “MyHome”, was deemed not suitable as it could only control the heating. Our cottage has a conventional boiler; a traditional timer would still be required to control the hot water.

Other systems were also found to be lacking. They may have been able to control heating and hot water but were either expensive, over-complicated, difficult to install or just looked plain difficult to use, an important consideration if guests need to tweak the heating during their stay.

When Hive Active Heating was first announced it ticked all the boxes. It could control the hot water on conventional systems. It looked easy to operate. It was backed by British Gas and the total cost, including installation by a British Gas HomeCare engineer was a reasonable £199.

It is worth noting that you do not need to be a British Gas customer, nor is there any need to change energy suppliers, to take advantage of that price.

Hive Active Heating requires a working broadband connection so my first job was to get ADSL installed. It can sometimes be a bit difficult timing contractors with our visits, so was lucky to line up the installation of Sky Broadband just before Christmas & Hive during the February half-term. Although this is an extra cost to us it is an additional feature we can offer guests and is also being used by a Now TV box to provide Sky Movies.

Our system had a traditional Honeywell analogue dial thermostat and two timers; one to control the central heating, the other to control the hot water. The second timer had been neatly retrofitted by the previous owners so that they could independently schedule heating and hot water. This was some cause for concern as it wasn’t what you’d call a standard installation. Would this cause a headache for the HomeCare engineer?

It’s worth noting at this point that although Hive supports combi and conventional boilers it only supports single-zone systems. If your system has more than one wall mounted room thermostat to control the temperature of different zones in your house then Hive is more than likely not suitable.

It does, however, work fine with radiator valve thermostats, so there should be no issues if you use these to adjust temperatures around the house.

The engineer, Chris, turned up on time and proceeded to talk me through the installation process. I mentioned the dual timer set up and, after tracing the wires and valves, he informed me that it wouldn’t be problematic.

I’d already installed the iPhone application at this point; it’s available for free on the iPhone store (and Google Play for Android phones). It needs to be connected to an active Hive account to work but there is a demo mode so that you can play about with the app beforehand. The app remains logged in for convenience but can be pin protected.

There are currently no plans for a Windows Phone app but that may change if there is a demand for it. For those without smartphones there is also a website that can be accessed through a PC or Mac browser with a handful of extra features, including temperature graphs.

The Hive hardware consists of three units; a hub, a receiver and a digital thermostat. 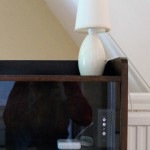 Ideally the hub needs to be situated close to your ADSL router and within range of the receiver and thermostat. It connects to the router via a short Ethernet cable and requires a mains power supply. The hub acts as a wireless bridge to the receiver and thermostat which are wireless but use a standard called Zigbee; different from Wi-Fi but more suited to low power devices.

If it is found during installation that the hub is not sufficiently close to the thermostat or receiver, preventing them from connecting to each other, then British Gas can supply a SmartPlug. This plugs into a mains socket in a convenient location mid-way and boosts the signal between the Hive devices. We did not require one for our installation as all of the devices are located within feet of each other. 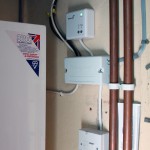 Our engineer connected the hub up and left it to connect back to the Hive servers over the Internet so that it could download its configuration and firmware updates. He then set about replacing the existing thermostat and timers with the Hive receiver and thermostat. 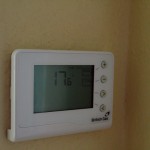 The existing timers and thermostat were removed along with any associated wiring and the new receiver was installed in our boiler cupboard. Finally he screwed the new digital thermostat onto the wall. This is wireless and powered from 2 x AA batteries (supplied) so no new wiring was required. It also conveniently masked the holes left behind after removing the old thermostat.

I was then shown how to operate the system through the thermostat, on the iPhone app and manually using the override buttons on the receiver. Finally, after a demonstration on how to replace the thermostat batteries and checking our mains consumer unit, he wrote out an installation certificate and left.

Overall I’m very pleased with Hive. The system resolves the two biggest headaches we have managing a holiday cottage from afar; resetting the heating between bookings and being confident that the central heating is set correctly in our absence.

We completed the purchase of our cottage in summer last year so heating wasn’t an issue then. However, in October, we had to set the heating onto a generic “low” setting to ensure that the house was kept warm until our next planned visit in December. With rising energy prices this was a necessary evil to help prevent damp and more importantly prevent pipes from freezing over.

I believe that the system will pay for itself within the claimed 18 months as I can accurately control the heating and hot water from anywhere and monitor the inside temperature over time with the helpful graphs on the Hive website.

The digital thermostat is easy to operate with an easy to read backlit LCD display. The unit does not have a touchscreen; just 4 buttons to control everything. Whilst this makes some operations more difficult (such as programming the system) it is perfect for our needs and it’s easy for our guests to tweak the current temperature using the top two buttons. Anything more complicated than that I’d suggest going online or using the app.

If you do not have a smartphone, or (as is often the case in Norfolk) find yourself out of 3G range, you can program the system to accept text commands from up to 6 numbers to control the heating and check status.

Other useful features include optional system alerts if the temperature rises above or falls below user specified values and other system alerts, for example low thermostat battery. You can also view the status of all Hive devices on the website.

Despite the flawless installation, our system was initially not without its faults:

The million dollar question – how would Hive’s customer support deal with this?

The good news is that the customer support (@HiveHelper on Twitter) is very good. They’re polite, responsive and in my experience understand the product and their customers

They suggested temporary solutions and informed me that the developers (who respond appropriately to the more technical tweets)  were working on a more permanent fix.

The first of (hopefully) many new features has already been released. From this month iPhone users are now able to control the heating by their location. Utilising the phones Location Services it gives users the option to switch heating on and off as they leave & approach their home. Whilst this is a feature we are unlikely to use it is a fairly smart use of technology.

It would be nice to see more features aimed at holiday lets, for example a “Landlord Mode” where the thermostat could be disabled from fully controlling the system and an upper and lower temperature limit could be set for the thermostat. Our engineer said that he’d installed many units in holiday cottages in the area. I could see this being a welcome addition in the future for many owners including myself.

I hope that Hive is the first in a range of simple to install & interlinked home automation products from British Gas and I look forward to seeing the Hive hub and app being used to bridge to other smart devices in the home, such as lights, mains switches, and radiator thermostats.

I was made aware on Twitter that a firmware update to the hub (version 3.10r04) and receiver is currently being rolled out progressively to customers to fix the first bug and that my hub was being updated as they tweeted. I was also told that they have a fix ready for the less critical second bug which will be rolled out at a later date.

A pleasant surprise this morning.

The firmware on our hub was updated overnight to version 3.11r07; this updated increased the number of on/off events for heating and hot water from 4 to 6 – a much requested and anticipated upgrade to the system.

It is now possible to independently select 4 or 6 time slots for heating and hot water from within the app or from a new menu item (“Schedule Options”) online.

This is a big plus for us; our guests have often requested the heating or hot water be boosted midday.

The website was updated a couple of weeks ago to make it more responsive. It now looks a lot bolder and more cheerful. The basic user interface remains the same which is good; if it ain’t broke, why fix it.

I noticed today that the firmware on my hub has been updated to version 1.0.0-b3850. This has happened in the last day or so; not quite sure this means as there has been no announcements. I’m assuming bug fixes and a new firmware numbering convention subsequent to British Gas acquiring the company AlertMe and bringing the development of Hive in-house.

I’m hoping that there is more to this and it is in readiness for releasing new Hive peripherals; perhaps a smart light bulb or smart plug, though no announcements have been made yet.

Installed the Hive Active Door Sensor in The Prairie. Read our review here.