I watched the excellent “Walking Through History” (Channel 4) with interest yesterday. In the episode (S2-Ep6) the presenter Tony Robinson (he of Black Adder and Time Team fame) started off at Sandringham House and walked, over a period of 4 days, to Cromer.

The programme concentrated on the North Norfolk coasts Victorian era, of which there is plenty of surviving evidence, including The Prairie Cottage which was built circa 1880.

The Victorians, despite their grandeur were not the only people to have had a major impact on the area. They played but a small part in the role of man in historic Norfolk.

Thankfully there are plenty of brilliant tourist attractions keeping Norfolk’s historic past alive for the nation, many of which are suitable for families, and by that I mean not boring!

Norfolk made the news headlines a couple of years ago with the story that the prehistoric rivers and forests of East Anglia were the cradle of British civilisation. The study, by The British Museum, detailed a treasure trove of flint tools, animal and plant remains discovered by archaeologists near the village of Happisburgh.

Norfolk Man would have entered Britain around 950,000 years ago via the natural land bridge that existed between the UK and mainland Europe at the time.

More recently in January 2014 the same archaeologists discovered the earliest evidence of human footprints outside of Africa on Happisburgh beach. Described as one of the most important discoveries made on Britain’s shores, these incredibly rare footprints are direct evidence of prehistoric man and date back around 800,000 years. 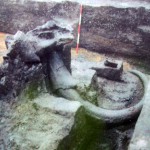 Earlier discoveries include the West Runton Elephant; a fossilized skeleton of a mammoth found in the cliffs just down the coast from Sheringham in West Runton. This find, in 1990, is the largest nearly complete mammoth skeleton known and the oldest found in the UK.

The fossilised remains date back around 6-700,000 years and are on exhibit in the Cromer Museum.

Finally, in Holme-next-the-Sea (near Hunstanton) a 4,000 year old bronze-age timber circle was discovered under the shifting sands of the beach. A replica of this can be found in the Lynn Museum. The circle was nicknamed “Seahenge” by the local and national press in the late 90s, after the more famous prehistoric structure in Wiltshire.

The Norfolk Broads are often mistaken by tourists as being a natural feature of the landscape. It was however discovered in the 1960s that the waterways are artificial features created by medieval peat excavations.

Norfolk is largely synonymous with the Broads and you can find out more about life around the Broads through the years by visiting The Museum of the Broads in Stalham.

Building started on this iconic Norman Cathedral in 1096 and was completed circa 1145. At the time it was one of the largest major Christian churches in Europe.

The cathedral retains the greater part of its original stone structure despite several episodes of damage that threatened the building fabric. The wooden spire was hit by lightning just 23 months after completion, causing considerable fire damage. It was badly damaged in the riots of 1272 but repair work was completed 6 years later.

The cathedral is still used by worshipers and is one of the Norwich 12 heritage sites.

The castle as it stands today was probably built around the year 1,000 and is mentioned in the Domesday book. It was constructed by order of William the Conqueror because he wished to have a fortified castle in the important city of Norwich.

The castle is also one of the 12 Norwich Heritage sites and now houses the Norwich Castle Museum which holds significant objects from the region, especially archaeological finds, along with interactive displays of historical life in and around the castle. 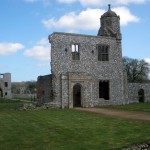 Baconsthorpe Castle near Holt is a fortified and moated 15th century manor house maintained as a managed ruin by English Heritage.

Lived in and extended by the Heydons of Norfolk, this castle was inhabited until 1920.

The ruins include complete curtain walls and partial remains of the towers and gatehouse. Access is free to the public.

The Sandringham Estate is well known these days as being the much-loved country retreat of HM The Queen. How the royal family came to love Norfolk is a different story altogether.

The property was purchased in the 1860s by Queen Victoria and her husband Albert for their wayward son Bertie, the future King Edward VII. Victoria hoped that the calming influence of North Norfolk would tame Bertie, but away from his parents prying eyes quite the opposite happened and he was renowned for holding extravagant parties at Sandringham and had a string of society lovers.

By purchasing Sandringham the royal family established strong links that remain to this day and along with the newly established railway kick-started the Victorian love affair with the North Norfolk Coast. 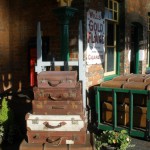 The North Norfolk railway was a central part of the fledgling Victorian tourism industry’s story. Thanks to Dr. Beeching’s cuts in the 1960s the national railway network is a mere shadow of its former self but there are still some preserved gems out there, fulfilling their tourism role, but in way that could not be imagined by their architects.

The North Norfolk Railway (also known as The Poppy Line) is a beautifully preserved stretch of line running between Weybourne and Sheringham, with a new level crossing link onto the Bittern line. It’s popular with locals and tourists alike, with a scheduled steam service running daily during peak seasons from the pretty station in Sheringham.

The station is very much part of the fabric of Sheringham and runs special events throughout the year for enthusiasts and tourists alike. It forms the perfect backdrop for one of the more popular events in the Sheringham calendar, the 1940s weekend. 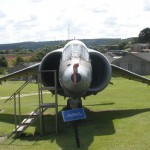 The museum’s 25 tanks are all in working order and a selection of them can often be seen putting on a display for visitors against the backdrop of the Norfolk Coast.

With exhibits ranging from the history of the Suffolk and Norfolk Yeomanry from 1782 through to aspects of modern warfare, including a Hawker Harrier, there is plenty to see and do.