For the first time in as long as I can remember, we celebrated New Year in Sheringham. We loaded the car up after Boxing Day and drove down to the coast after taking care to fill the roof box with all kinds of goodies and the car with three excited children and Grandad. 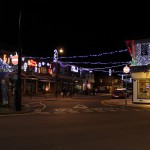 We arrived early evening and as we dropped down to Station Approach were greeted by the cheery Christmas decorations that had been erected down the High Street.

It’s thanks to the local community and traders that Sheringham remains vibrant through the year. It’s clearly busier during the summer months but never feels dead out of season. I walked around the town at one point taking a photo of all the shop fronts, as a visual memo ahead of updating our welcome pack and website for this year. I’m fairly sure I noted a small handful of new businesses in the town, and those that were open were not short of potential customers; my wife, who loves the High Street, being the main one!

Despite the predicted storms, the Norfolk sky overcame the clouds more days than not. This brought out loads of people looking for a bargain in the shops or simply working off the excesses of Christmas with a festive walk along the coastal paths. 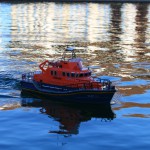 The boating lake is an ideal destination for kids of all ages with radio controlled boats. This year we bought the kids a model RNLI lifeboat, which has been launched several times. Thankfully we were not called upon to rescue any boats in distress, though at some point it was involved in several ramming manoeuvres with my youngest’s speedboat. I’m not entirely sure that this is how real lifeboats operate, but it did raise some laughs!

Clearly it’s too cold to go swimming in the sea (though we did spot the odd family going in on New Years Day), so my wife took the kids to Splash, which always goes down well. I popped down to the North Norfolk Railway to take some photographs and chat with the staff; the train service was running a Mince Pie Special service after Christmas. Sadly, we missed the pantomime at Sheringham Little Theatre, but appreciated the refurbished box office and hub.

We celebrated New Years Eve by having lunch at the Chai Yo Thai Restaurant, which was well up to their usual standards, and excellent value if you choose off their lunchtime buffet menu. In the evening we had family round, so The Prairie was packed with grandparents & siblings, partners and friends. Fortunately we’re set up for larger parties so it didn’t feel too cramped. We spent the evening polishing off nibbles, catching up with the gossip and playing board games. My eldest two just about managed to stay up until Big Ben bonged 12, but they did not surface until midday!

The car sat on the drive most of the week, though we did venture out to Blakeney later in the week. The Norfolk skies yet again did not disappoint, and we ate heartily at The Kings Arms, near the quayside.

Sheringham is a lovely place to live and, having purchased The Prairie in August, we would not change one thing. We’ve discovered that it’s not always easy running a holiday let, but are thankful for the assistance of Keys in getting us over the learning curve.

It was with some sadness that we noted the damage done to the promenade during the recent storm surge that caused so much havoc in coastal areas around the country, but were thankful that on the whole the town had been kept safe from the sea by the defences in place, and grateful that Cromer Pier, which also took a hammering, was not too badly damaged, and able to open for business.

I was following the storm surge on Twitter with some alarm, but the more I read the reports the more I realised the strength of community in the affected towns. Thankfully, due to our position, it’s unlikely we’ll suffer coastal flooding, but our thoughts go out to all those whose homes and businesses were affected by the wind and the sea. One thing is clear; living near the Norfolk coast is well worth the risk. We would, however, recommend being vigilant during stormy weather.

And looking forward to the year ahead…

This will be the first full year of us owning The Prairie, and as such we’ve been looking at what we can do to improve the holiday experience for our guests. We’ve just had ADSL installed, so now offer free WiFi Internet access, and are looking at other ways of maintaining and improving the standard of accommodation we offer. Some rooms have been marked for redecoration and there are a few other odd jobs to do.

We are now listed in the Keys Holidays 2014 brochure, which is exciting, and are looking forward to working with Keys to ensure that we have plenty of bookings through the year.

The Prairie is already starting to get booked for this summer, which is worth considering, and we offer good discounted rates for smaller parties out of season.

Finally, we hope that you have had a fantastic Christmas and wish you all the best for 2014!