The Prairie Cottage is a property that longs for a story to be associated with it so was pleased when Christine, the previous owner, passed on an interesting nugget of information shortly after we purchased it: 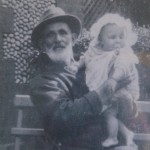 “… Although I did not know it at the time I bought the house, it was the family house of my partner’s Robert Craske’s great-grandparents. When we got to know each other a few months after I bought The Prairie he showed me the picture of his great-grandfather George Craske outside The Prairie holding Robert’s father, Sidney Craske, then a babe-in-arms, so taken around 1918…”

She left the picture in the hallway, and there it will stay as a reminder of how history often ties people to the past in surprising ways.

My mother and aunt have recently become interested in genealogy, having grabbed the baton with earnest from older members of our family who have been researching our family tree on and off over the last 50 or so years. I related the story to her and she informed me that Craske is a common name in the area.

Having heard their fascinating tales of research and having my interest piqued, I thought I’d do a bit more research on The Prairie, and its place in Sheringham’s history.

What’s In A Name?

I was now in possession of a picture, a location, some names and a date. Time to hit the Internet.

The first thing I found, was an old picture of The Prairie in a shot of Beeston Road on the National Education Network website. It would be fair to say that the scene has not changed much in the intervening years. This picture was a surprise find but did not aid my research, so back to the Internet…

According to the Internet Surname Database), the surname Craske is of pure East Anglian origin and derives from the Latin “Crassus”, meaning “one who is hale & hearty, in good health and spirits” and if you research the name on ancestry.co.uk, you find that in 1891, the highest density of Craske’s still lived in Norfolk.

Hitting Google with the name “George Craske” and “Sheringham” came up with a couple more interesting, albeit not immediately helpful, references.

“During a gale on the 29th October 1880, George was a crew member of a fishing boat, “The Gleaner”, which was lost with all hands off the Sheringham shore”.

That can’t be the George Craske in the picture, given that The Gleaner went down nearly 40 years before the picture was taken.

I then found a reference to a gravestone in All Saint’s Church Cemetery in Upper Sheringham with the following inscriptions:

George & William were mentioned in this article about The Gleaner; it looks like I’ve found the final resting place for two of the lost fishermen but not of George Craske in the picture. However, the names are similar, so perhaps there is a family link here somewhere? 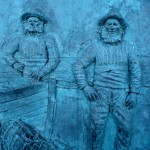 There is an interesting mural of “Big John Craske & James ‘Squinter’ West” on the West Promenade, part of the Art & Sculpture Trail, depicting them on shore next to their fishing boats & equipment. Again, no obvious link other than the surname.

Where now from here?

I may get around to asking the previous owner for a bit more to go on, but that kind of takes the fun out of it. At some point in the summer, when I’ve got a week or so off, I may potter around the local churches and graveyards to see if I can find out a bit more via my own investigations.

I suspect most of the fun in genealogy is derived from the journey, not arriving at the destination!

However, if you are reading this and can contribute some useful information, please get in touch!