I’ve been trying to work out why I have such an affinity for the Norfolk Coast and Sheringham in particular. This lunchtime, whilst lightly dwelling on the matter at work, I came across an article on Wikipedia:

Certain places hold special meaning to particular people… Places said to have a strong “sense of place” have a strong identify and character that is deeply felt by local inhabitants and visitors. Sense of place is a social phenomenon that exists independently of any one individual’s perceptions of experiences, yet is dependent on human engagement for its existence…

This paragraph struck a chord with me. I’ve often wondered how my perceptions of Norfolk have shaped my sense of place; a feeling of deep relaxation and inner peace that is somehow unidentifiable but noticeable.

I’m convinced that to become at one with a place you have to fully engage all five senses.

A Sense of Sound 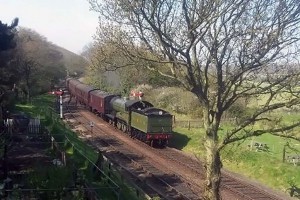 I missed the age of steam by a good couple of decades though my mum remembers it.

She recounts childhood memories of standing on railway bridges whilst trains thunder underneath, enveloping those above in a celebratory cloud of smokey steam.

Thanks to the tireless volunteers at the North Norfolk Railway you can experience that in Sheringham and, if you listen very carefully, you can hear the chugging, whistling trains as they ferry passengers to and from Holt. It lends Sheringham a kind of other-worldliness that befits its character and makes it a perfect location for events like the 1940s Weekend.

There is another sound that is often overlooked; the sound of honest chatter. I’m a huge fan of local dialects and in my honest opinion the Norfolk accent (or Broad Norfolk) is one of the best. It’s warm and welcoming and full of endearing turns of phrase that I find myself saying back home. My brother was only 5 when my folks moved to Norfolk so he’s got no trace of Lancashire accent left and I reckon he’s all the better for it!

A Sense of Sight

From city to coast with the Broads in-between the county of Norfolk is a playground for photographers and artists.

Picture postcard villages seemingly untouched for hundreds of years are dotted around the landscape and Norwich prides itself on 12 iconic buildings spanning the Norman, Medieval, Georgian, Victorian and modern eras.

The occasional windmill punctuates the landscape and the gardens and greens of Norfolk are beautifully presented, complete with carved and painted village signs.

As an aside, I only found out whilst writing this article that the village sign originated in Norfolk early in the 20th Century when Edward VII suggested that they would be an aid to motorists and give a feature of interest on the Sandringham Estate.

The visual appeal does not stop at ground level. Somehow the relative flatness of the landscape and the outstanding natural beauty of the coast combine to highlight the heavens, the so-called “Big Sky”. From day to night, in sunshine or during thunderstorms you will not be disappointed when you lift your eyes up to the heavens.

A Sense of Touch

You can’t beat walking down a beach barefoot and Norfolk has some of the finest in the country spanning the coast between Hunstanton and Great Yarmouth.

Even the artificial beach defences have yielded to nature with craggy rocks and rough grained groynes gilded with seaweeds, shells and interesting holes; perfect for rock pool explorers!

Not to be outdone, the villages echo the beaches with traditional flint facades dominating streets and no two buildings constructed along the same lines allowing for alleyways to duck into and explore.

A Sense of Smell

I think my memories are strongly linked to my olfactory sense. Often a smell will trigger a childhood memory; the smell of fresh cut grass on a summer’s day or melting tar on a cobbled street take me back to my formative years playing on the streets of Stockport.

Sheringham, like many smaller coastal towns, has a strangely nostalgic aroma. Near the coast the air is laden with salt spray and seaweed. As you travel inland you will become more aware of the seasons in a way that is impossible in towns and cities.

A Sense of Taste 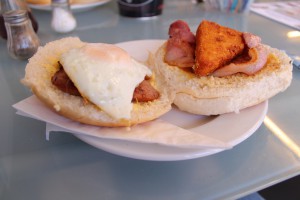 There is nothing more fulfilling than grabbing a bacon & egg barm from the Submarine Cafe in Sheringham early in the morning and watching the sunrise or having a fish & chip supper whilst watching the sunset!

I would highly recommend driving through the countryside and falling upon a small country pub and checking the menu. Norfolk is a true gastronaut’s delight!

A Sense of Place

Between starting this post and completing it I had the opportunity to pop down to Sheringham to check the cottage, see my folks and test my hypothesis. I’ve come to the conclusion that Norfolk is my own private Idaho.

If you’re in the market for some quality R&R, if the modern pace of life is getting you down or you just need a few days offline to recharge your batteries then I’d highly recommend a short break or longer on the Norfolk coast.